Kimberley Ryan has been involved with the Atwater Library for five years. She started volunteering in the library in 2016 and quickly became the head librarian, a position that she held until 2021.

Ryan is an avid reader. She likes all kinds of books, both fiction and nonfiction. She reads almost all genres, including mysteries, thrillers, romances, biographies, and memoirs. To find new books, Ryan looks for books with blurbs written by authors whose opinions she trusts. She also follows some booktubers (content creators that make videos about books) on YouTube to see what books are coming out every year. In addition, Ryan also reads some book reviews in The New York Times and Globe and Mail.

Ryan’s favourite books are The Red Prince: The Secret Lives of a Habsburg Archduke, by Timothy D. Snyder (New York: Basic Books, 2010) (from her own collection) and A Swim in a Pond in the Rain: In Which Four Russians Give a Master Class on Writing, Reading, and Life by George Saunders (Toronto: Random House of Canada, 2020) (from the Atwater Library collection).

In The Read Prince, Snyder talks about the life of Wilhelm Von Habsburg, the archduke of Austria in the 20th century, and his involvement during the First World War. Ryan read this book years ago while she was doing her undergrad in political science and history. For her, this book is a great example of a narrative, historical book, one of her favourite genres. 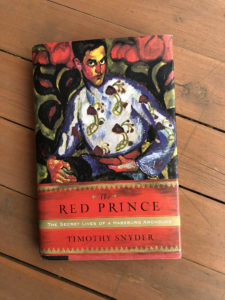 In A Swim in a Pond in the Rain, Saunders makes a critical analysis of seven short stories by four Russian writers: Chekhov, Turgenev, Tolstoy, and Gogol. The author based this book on an MFA course he teaches at Syracuse University. He talks about what makes a good story and how the writer thinks and creates a story. For Ryan, this book rekindled her love of literature, and at the same time it helped her to see a different way of analyzing and enjoying literature in general. 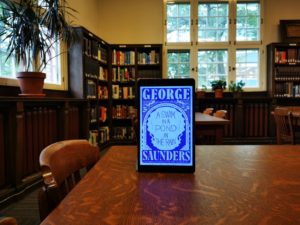 George Saunders, A Swim in a Pond in the Rain: In Which Four Russians Give a Master Class on Writing, Reading, and Life (Toronto: Random House of Canada, 2020). Digital Montreal, QC. 2021. Photographed by Wanessa Cardoso.