Ramsay, an Atwater Senior celebrity, started as a non-reader, got drafted into the military reserve where he learned to drive and break things. So he decided to go into construction where he could continue to build and break things. Then he decided to retire. He eventually decided to go back to school to learn to read and write in his own language, advancing, going backwards, and continually advancing. He found himself at the Atwater Library in the Digital Literacy program making sounds, noises, and shapes. Then he made videos, at which he was semi-successful, still making and breaking things. He says: “I’m always trying to improve on things I try, and try to improve on things as I go on. That’s the best way to say it.”

The Lost Two Years by Ramsay 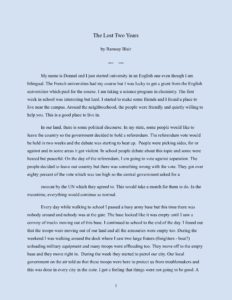 Canada in 150 Seconds : Canada as a car race by Ramsay

Why the Wee People Had to Move by Ramsay

The View From The Library

Cup of tea/ Cup of coffee