Sally Mann has been a member of the Atwater Library for almost ten years. She and her husband moved from Maryland, USA to Montreal after their granddaughter was born. They both attend the Atwater Library book club, which Mann believes to be a great opportunity to read books that she would not necessarily pick up by herself.

Mann likes to read mystery and action books. For her, these books entertain her and have a story to tell. To find new books, Mann reads the book reviews in the New York Times. She also likes to go to bookstores and pick up books that sound interesting. In addition, she also exchanges book recommendations with friends and family members.

Mann’s favourite books are the Winnie the Pooh stories by A.A. Milne (New York: American Book-Stratford Press, 1961) (from her own collection) and The Overstory by Richard Powers (New York: W.W. Norton & Company, 2018) (from the Atwater Library collection).

In Winnie the Pooh, Milne tells children’s stories about Winnie the Pooh, a teddy bear that belongs to a child named Christopher Robin. Pooh has many friends with whom he interacts through different books, such as Tigger, Piglet, Eeyore, and Kanga. The author based the characters in his story on his son’s stuffed animals. Mann read the stories of Winnie the Pooh for the first time when she was taking a class on children’s literature during her undergraduate degree in English with a minor in history. She still has the same collection that she read for the first time when she was around 20 years old, now held by her granddaughter. She enjoys these stories because they discuss subjects such as friendship and helping people overcome their problems. For her, the characters and the kindness she finds in the story also make her think about friends and people she met. 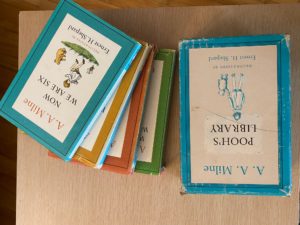 In The Overstory, Powers tells the story of immigrants to the US and how their lives develop by trying to protect what they call the mother tree. Mann read this book about the interaction between nature and people for the Atwater Library book club. For her, The Overstory raises attention to the interaction between people and their environment and it’s an important reminder to not be tolerant of our destruction of nature. 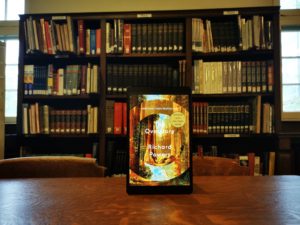