Down the Rabbit Hole of Dreams

The earliest memory that I have retained of a dream (more properly termed a recurring, unsettling nightmare in my case) can be attributed to the third segment in Walt Disney’s Fantasia known as The Sorcerer’s Apprentice. I viewed it for the first time in childhood. Fantasia was the first commercial film shown in stereo and a precursor to ‘surround sound’. It has been reissued multiple times since 1942. The part that repeats like a gif in my mind is where the young apprentice of the sorcerer Yen Sid, Mickey Mouse, loses control over the broom that he magically brings to life. The broom is commanded to empty buckets of water into a cauldron that eventually overflows. Chaos ensues. The orchestral music originally composed by Paul Dukas based on Goethe’s 1797 poem ‘Der Zauberlehring’ and iconic animation of Walt Disney Studios combine to haunt me even today, especially during this relentless, uncontrolled pandemic of 2020.

The stuff of dreams is mind-boggling. The historical schism between Sigmund Freud and the father of depth psychology, Carl Jung, was over dreams and their interpretation. For Freud, dreams were expressions of ‘wish fulfillment’. Jung’s The Red Book of hand calligraphy and illuminations in the style of a medieval manuscript is considered to be a window on his dreams and the collective unconscious:

Based on a survey of over 9,000 dreams about COVID-19, the author of the recently published book, Pandemic Dreams, Deirdre Barrett claims that most coronavirus dreams provoke anxiety and exhibit patterns similar to other crises she has researched such as 9/11. 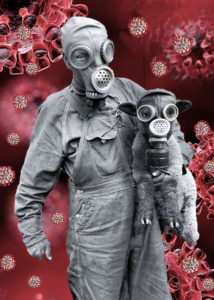 Barrett has had her own coronavirus-related dreams. This digitally manipulated photo-collage was inspired by her dream in which she was “trying to put a hood over my cat Morpheus’s head to protect him from something toxic in the air.” Illustration by Deirdre Barrett 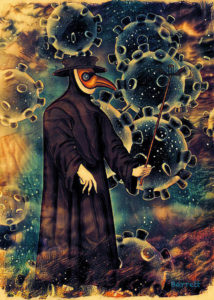 “I was in the library of a home that felt centuries old. It was cozy and safe in the library but I knew that outside, a terrible plague was ravaging the world. It felt much more like Europe during the Black Plague than modern COVID-19 times,” said Barrett who used the image of a plague doctor wandering a landscape of COVID-19 particles to represent her dream.  Illustration by Deirdre Barrett

It does not take long to fall into the rabbit hole of dreams. Did you know there is even an online guide to dream interpretation?

The Committee of Dreams: How Artists, Scientists, and Athletes Use Their Dreams for Problem Solving and How You Can Too (2010)