Three members of our Digital Literacy/ Storytelling group were among the participants in the two-part Zoom writing workshop “Breathing into Creativity” hosted by the Atwater Library on the consecutive Thursdays, Nov. 26 and Dec. 3, 2020 from 2:00 to 3:30 p.m. Organized and facilitated by Elise Moser in conjunction with AWE (the Atwater Writers Exhibition project), and offered free through the generous support of the Canadian Cultural Action Fund of Canadian Heritage, the two workshops were led by poet, artist, and educator har leen, coordinator of the South Asian Youth (SAY) collective of the South Asian Women’s Community Centre (SAWCC).

Har leen was a proverbial breath of fresh air–gentle, sensitive, attentive, enthusiastic, encouraging, and dynamic in the moment. “A storm called har leen.”
In spring and summer, it is in the wake of a storm that atmospheric conditions permit the emergence of butterflies from their chrysalides.

After inviting us to share our personal introductions and a glimpse of our creative projects–ranging from a novel in progress to a final-edit podcast to self-supportive journaling–har leen led us through a series of prompted timed writings grounded in Julia Cameron’s “getting it on the page,” Natalie Goldberg’s continous free-write practice, and some visualization and visionary magic all her own.

Har leen asked us to consider the extraordinary reality that many of us are, in fact, fortunate to be living at this difficult time–confinement to an often drearily mundane existence in the midst of a worldwide event of uncharted and super-mundane proportions. Day by day, how might we breathe meaning into our story, reimagine intimacy, and find an expressive voice for our feelings, senses and instincts in this nebulous mix of insular routine, vast virtual community, and intangible crisis? Let’s begin…

Har-leen: Tell us the most mundane fact about you, now!

Our Story trio, for example, responded:

Marlene: What’s most mundane about me? I sleep a lot.
Karin: Well, the most unusual mundane thing about me, that I can think of: I always write with a pencil, not a pen.
Donna: If I were left on a desert island with only three foods, one of them would have to be oatmeal. I could live on oatmeal.

So then a brief timed freewrite began with our immediate, mundane, be-here-now afternoon. No right or wrong way to do this, har leen reminded us. We could write anything, with only Goldberg’s one “rule” in mind: Don’t lift your pen or pencil from the paper until time’s up–“even if you think you have nothing left to write except, ‘I’ve got nothing left to write,” ten times over!”

Har leen then led us carefully and mindfully into a visualization exercise. “I know some people really don’t like visualizations..they find them boring, they’re impatient…Maybe you just don’t get much out of them. But today I’d like us to try to join and share in listening. Relax, stay with the experience, be open to whatever comes to you. And then we’ll write.”

I’m one of those people who really don’t like (HATE) visualization exercises. But I–We–all choose to trust.

Har-leen takes our hand, begins with us as we are. Our space, our bodies…where we stand…or sit..on this chair…

Do things feel hard, tense, achy, soft, cozy? Listening…are there sounds in your environment…natural like birdsong, or traffic, just noise..other voices…music? Tune them in and out, up, down…Now inside the body, the rhythms of breathing, heatbeat. What about the temperature…maybe it’s cold in your room…or maybe you feel warmth, comfort…Are there smells around you…maybe someone’s baking…soap, laundry, animals? Feel your feet, touching the floor, its texture…does it soften against your toes?…the colours around you…are they changing..? Maybe you can sense the daylight fading or glowing.

Little by little, har leen’s measured words and pauses guide me in a subtle transformation.  Resistance gives way to a slow, dreaming earth-magic. But can this liminal fairy-telling take me on a journey from the space of a dull old mind in a dull old apartment in this–this–this–awe-full 2020?

Now we’ll write, har leen says, as we emerge. During the visualization, what were you feeling? Were you just bored…were you sad, lonely…maybe you’re feeling lost, or there’s been sorrow, grief. But maybe you’re feeling joy. Maybe there’s a new baby in your family, you’re all excited about the baby. Maybe you’re angry, frustrated..but then, maybe you’re grateful, too, for the quiet time, and looking forward to the new year, waiting…hoping. Try to write about the feelings that came up for you in the visualization, whether they surprised you…and how they changed, or came and went…

Now she smiles radiantly and says, “I’ve always been fascinated by space…and all the messages that we’ve sent from earth into space. Like the sounds and rhythms of our planet, the whales, the birds, the ocean.” (She gazes upward, longingly, and we just know the stars are out there.) “Or music–how they sent the Beatles’ song “Across the Universe” out into space on the 25th anniversary of its release. I think that’s so amazing. What would someone feel, light years away, hearing that message? And all the time capsules over the years. Is anyone receiving them? Just imagine, are other civilizations out there listening? It’s so exciting!” 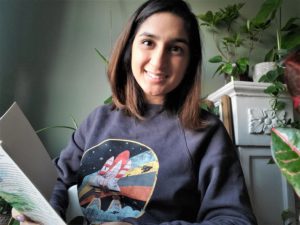 “What if you sent a message to the universe today, right now? What would you want to tell them about this moment on earth? What would you ask the universe in 2020?”
“Go back over what you’ve written–circle the words, maybe a whole phrase or sentence, that stand out for you, really speak to you. Then take these and see if you can make them into a poem–a super-mundane poem, your special message from Earth to Universe in December 2020.”

We write again–not for long. With spontaneity. With urgency. A shout out, a plea, a birthing cry to the warm ear of the universe.

And when har leen invites us to choose immediately a few lines, and read them aloud, suddenly there emerges a group poem, a chorus rising to the universe. Oh, super-mundane. Oh…Oh! From porridge, pencils, and power naps…we have travelled a long, long way…together. Wow. Listen.